Asisat Oshoala reached another milestone for her club yesterday when she scored Barcelona’s 100th  Champions League goal, in the quarter-final victory over Manchester City.

Since joining Lluis Cortes’ side in January 2019, she has been on a remarkable run of form, notably coming on late as a substitute to score her side’s consolation in a 4-1 defeat to champions Lyon.

Despite that final defeat, she entered the club’s history books, scoring her side’s first goal at this stage and also became the first African to score in a Women’s Champions League final.

Having netted 20 goals in 19 games last season, Oshoala continued where she left off, scoring 15 goals in 19 league appearances, and twice in six Champions League outings this term.

In a bid for a third consecutive semi-final, Cortes’ side, therefore, needed a quarter-final first-leg victory to boost their chances of progressing against the English giants at the U-Power Stadium.

Besides the quest for a win, the Catalans were also bidding to reach a milestone in the competition’s history, searching for their 100th  goal, with 99 in their last 51 matches and conceded 44 times.

In the list of Barca’s all-time Champions League scorers, Oshoala was ranked seventh, having scored four times – six goals behind leader Jenni Hermoso with 12 for Barcelona. 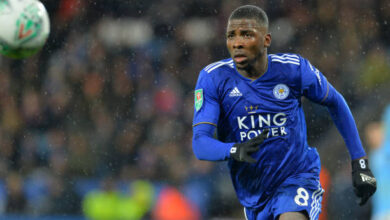