Fernando Torres scored twice on an emotional final outing for Atletico Madrid on Sunday but was denied a victorious farewell as Eibar snatched a 2-2 draw.

Torres struck in each half much to the delight of his adoring fans at the Wanda Metropolitano but a Lucas Hernandez red card helped Eibar claim a point on the last day of the La Liga season.

Enrique Garcia had given the visitors a surprise early lead and Ruben Pena capitalised on the numerical advantage by equalising late on, but this match was always going to be about Torres.

On his 404th appearance for Atletico, his goals were his 128th and 129th for the club, coming 17 years after his first, scored against Albacete in the Segunda Division in June 2001.

Torres has yet to declare his next move but this display — speedy, sharp and clinical — will have caught the eye of many interested parties.

In truth, the 34-year-old’s fairytale ending had already arrived on Wednesday, when he lifted his first Atleti trophy after the triumphant Europa League final against Marseille.

But this double added some extra sparkle in front of his own supporters, who stayed on after the final whistle to watch the team form a guard of honour as the striker left the pitch.

He had walked out the same way, with his three children, through a corridor formed by the Eibar players as Atletico’s fans displayed the words, ‘De Nino A Leyenda’, meaning ‘from a kid to a legend’.

Outside the ground, fans had posed for photos next to Torres life-size cut-outs and peered at message boards, detailing the player’s greatest moments.

This, after all, was a boyhood Atletico fan, who first watched his team with his grandfather as a child, and who, when he returned to the club for a second spell in 2015, drew a crowd of more than 40,000 just for his presentation. 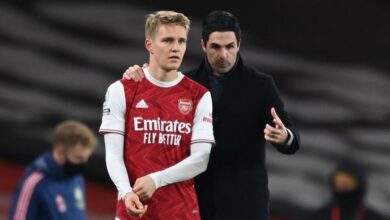