Three goals in four minutes set the tone for the Super Falcons’ 4-0 demolition of Burundi in their final Group C game of the Women’s Africa Cup of Nations in Morocco on Sunday, securing a place in the quarter-finals.

As a result, the Falcons have set up a potentially explosive clash with perennial rivals Cameroon in their final eight match on Thursday.

Forward Rasheedat Ajibade, Nigeria’s star girl, scored the first goal of the night in the 25th minute, before the Athletic Madrid woman provided the second goal for Peace Efih seconds later, as well as the third and fourth goals for Uchenna Kanu in the 29th and 46th minutes, respectively, in a comprehensive victory for Nigeria.

Randy Waldrum made four changes to the side that defeated Botswana 2-0 on match-day two of the tournament, with Efih, Kanu, Christy Ucheibe and Nicole Payne all replacing Halimatu Ayinde, Michelle Alozie, Rita Chikwelu and Francisca Ordega.

Ajibade, easily the game’s best player, caused problems for the Burundians time and time again, and was the key woman as the Falcons put their high-pressing tactics to good use.

The West Africans got the game underway with the first chance of the match falling to striker Ifeoma Onumonu, who fired wide, following a fine pass from Ngozi Okobi-Okeoghene just two minutes into the encounter.

Despite their early dominance, it took the nine-time champions 25 minutes to break their opponent’s defence after Ajibade outpaced her marker, before she was brought down inside the box by goalkeeper Eanine Irakoze.

The former Robo Queens striker dusted herself up before coolly converting from the spot from the resultant penalty.

Immediately after the restart, Ajibade’s fine cross was met by Efih, who converted to double the lead.

Not showing any signs of relenting, Waldrum’s side continued to press forward and were rewarded for their effort as Kanu grabbed the third goal courtesy of another Ajibade assist.

Kanu then thought she had grabbed her second of the night but had her effort correctly ruled out for offside.

The Nigerians got their fourth with just 20 seconds into the second half, with Ajibade once again the provider, setting up Kanu for her second of the night as the nine-time champions cruised to the last eight as Group C runners-up with six points — behind leaders South Africa, who were held 0-0 to round up their group phase campaign with seven points after earlier wins over Nigeria (2-1) and Burundi (3-1).

In the other last eight games, hosts Morocco clash with Botswana, South Africa play Tunisia, the third-place team in Group B, while Group B leaders Zambia battle debutants Senegal.

Winners of the last eight matches secure qualification to next year’s World Cup in Australia and New Zealand, with two losing quarter-finalists having the chance to also advance to the Mundial through the inter-continental play-offs.

Winners of the last eight matches secure qualification to next year’s World Cup in Australia and New Zealand, with two losing quarter-finalists having the chance to also advance to the Mundial through the inter-continental play-offs. 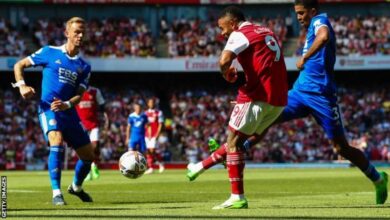