Sequel to Senate President’s directive on Wednesday that the Committee on Petroleum Resources (Downstream) join in efforts to end the current fuel scarcity that has lingered for close to four weeks now, has committee has summoned the Minister of State for Petroleum, Ibe Kachikwu, and Group Managing Director of the Nigerian National Petroleum Corporation, NNPC, Maikanti Baru.

The Chairman of the Committee, Kabiru Marafa, on Thursday announced that the two and other stakeholders in the petroleum sector have been invited to a crucial meeting on January 4, 2018.

The announcement was made available through a press statement from the media office of the Senate President, Bukola Saraki.

The statement noted that the meeting will be held on January 4, 2018 and will be aired live on the Nigerian Television Authority, NTA.

The Senate, which is presently on Christmas and New Year break is billed to resume committee work for budget defence on January 9, and commence plenary on January 16.

Buhari, others pray for injured son Yusuf at Juma’at 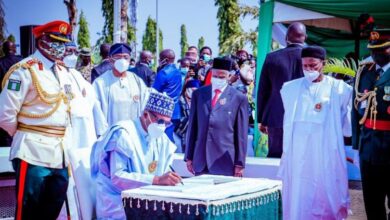