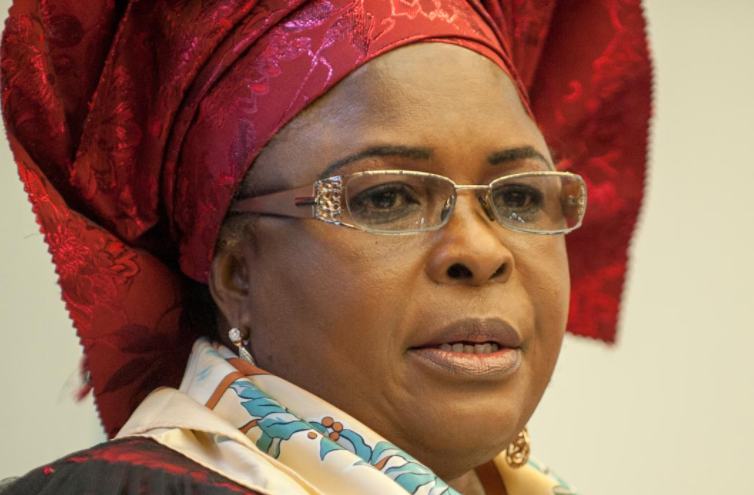 Former First Lady, Dame Patience Jonathan, has refiled a suit seeking to vacate a no debit order placed on her account containing $15.5 million at Skye bank Plc by the Economic and Financial Crimes Commission (EFCC).

The rifling of the suit was sequel to an order issued by Justice Mohammed Idris of a Federal High Court in Lagos on 8 May ordering her to refile the suit through writ rather than by originating summons.

At the resumed hearing of the matter today , Justice Idris granted an application by the former first lady seeking an extension of time within which to reply to the EFCC’s statement of defence.

The judge subsequently fixed 19 January 2018 as the date for the hearing of the suit.

While ordering the refiling of the suit, Justice Idris held that it will not be proper for the former first lady to commence the suit by way of originating summons since issues surrounding the ownership of the money are largely contentious among parties.

The judge while noting that oral evidences will be needed to resolve the issue in contention ordered parties to file their pleadings in line with the Federal High Court rules 2009 for trial to commence in the matter.

“The EFCC had argued that the matter was not properly commenced by originating summons on the premise that the facts were in total dispute and as such ought to come by writ.

“The plaintiff in her response argued that the affidavit evidence showed largely that there were no disputed facts of substance among the parties and that if the court is not sure of this, it should order pleadings so that a full trial can be embarked upon.

“It is now settled in law that originating process is the ideal process to commence a suit where there is no dispute. The issue in contest is on the ownership of the funds in the account of the defendants.

“In respect of this issue, the contention appears divided and facts are in substantial dispute. In the light of the above, it cannot be rightly contended that there are no disputed facts and substance as to the ownership of the said fund.

“The issues of facts raised by the defendants are not spurious or irrelevant. The affidavit of the plaintiff is also not conjectural. In my view, the facts are contentious and oral evidence need to be led by the parties.

“In the light of the above facts, this case is generally not suitable for an originating summon procedure. In the circumstances, the court hereby orders that the parties herein file pleadings in accordance with the Federal High Court rules 2009 and trial shall then proceed accordingly”, the judge held.

The former first lady has accused the anti-graft agency of placing a no debit order on her account containing $15.5 million at Skye bank Plc without a valid court’s order.

Mrs Jonathan, in the fundamental rights enforcement suit, is seeking an order to de-freeze the accounts where the money is domiciled, so that she can have access to it.

Respondents in the suit are; the EFCC, Skye Bank, Waripamo-Owei Dudafa, an aide to former President Goodluck Jonathan and four companies.