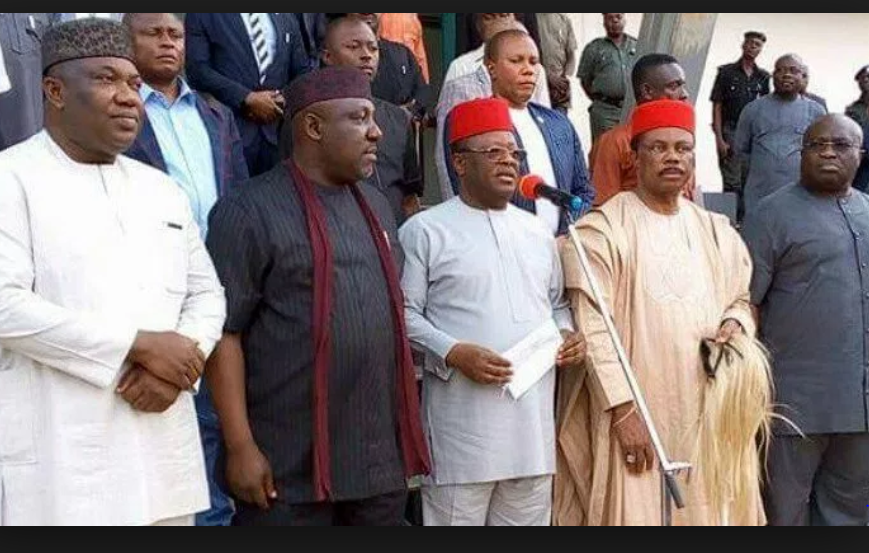 South East governors belonging to the opposition Peoples Democratic Party will meet soon to decide on a consensus candidate for the chairmanship of their party.

Governor Dave Umahi of Ebonyi state disclosed the planned meeting, but he did not indicate the date it would take place.

He spoke in Abakaliki on Tuesday, during the vote-seeking visit of Chief Raymond Dokpesi, one of the candidates for the chairmanship post.

The PDP will hold its convention on 9 December in Port Harcourt, and also fill party vacancies.

Dokpesi who called upon Ebonyi people to support him, gave an assurance that as the chairman of the party, he would sustain the legacy of the party’s founding fathers and that of Governor David Umahi.

He addressed the party’s 41st State Executive Council (SEC) meeting, held at the secretariat of the party in Abakaliki, the state capital.

Dokpesi acknowledged PDP’s dominance in the state and endorsed Governor Umahi for a second term, to enable him complete his projects.

“Based on our confidence, our faith is in the hands of God and the delegates,”Dokpesi said.

Umahi who introduced Dokpesi to the meeting said he is qualified to be the party’s national chairman. But he gave no further commitment.

“In the past we have voted blindly but now our eyes are open to seek negotiation with everyone aspiring, so as to agree on what he will do for us. What ever the zone comes up with, we will let you know”, Umahi said.

“The commitment and zeal of the aspirant who is going round 36 States of the federation to ask for vote is highly commendable. I am one of the apostles who will not give power to anyone that is not prepared, “Umahi added.