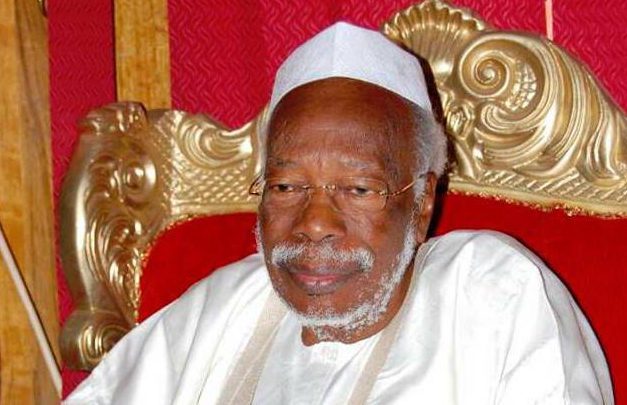 The Speaker of the House of Representatives, Hon. Yakubu Dogara has expressed sadness over the demise of second republic Governor of old Kaduna State, Alhaji Lawal Kaita who died at the age of 85.

In a statement, issued by his Special Adviser on Media and Public Affairs, Turaki Hassan, the Speaker described the late elder statesman as a man of outstanding character and a committed Democrat, who devoted his life to working for the development of democracy in Nigeria.

While noting the exploits and positive contributions of the late Alhaji Kaita as a member of Constituent Assembly that midwifed Nigeria’s Constitution and Governor of old Kaduna State, Dogara said he will continue to be remembered for his selfless service,  patriotism and abiding faith in the unity and progress of the country.

” Alhaji Lawal Kaita was a very courageous man who left a legacy of service and built bridges of friendship and unity across the north and the country in general”.

“He will continue to be honoured and remembered by present and future generations for his dedication to the service of his people during his tenure as a Governor and even after”.

” Painful as his death is, we are however consoled with the fact that Alhaji Kaita left an indelible footprint and legacy of service to the society as well as commitment to the ideals of democracy and nationhood “.

While condoling with the bereaved family, the government and people of Katsina state, Speaker Dogara prayed God Almighty to grant the deceased eternal rest.

Governor Aminu Tambuwal of Sokoto State has also condoled with the government and people of Kaduna State over the passing of Kaita.

In a statement issued by his spokesman, Imam Imam, the governor said Mr. Kaita made invaluable contributions to the development of the country.

“He was an acclaimed pacesetter who, along with other patriotic Nigerians of his generation, fought for the restoration of democracy in Nigeria at the turn of the century. His life is an example in dedication and commitment to democratic norms and values.

“Nigeria will remember the deceased as a man who gave his best years towards the development of multi-party politics. His contributions have enriched governance process at state and federal levels,” he added.

While praying to Allah to grant the deceased eternal rest and his family the fortitude to bear the loss, Mr. Tambuwal appealed to both the Kaduna and Katsina state governments to immortalise the deceased for the benefit of future generation.

Similarly, a former Vice President, Atiku Abubakar, described the late Mr. Kaita, as a fearless democrat whose immense contribution to Nigeria’s democratic struggles would be etched in brass.

Reacting to the demise of Kaita at 85, the former vice president said Mr. Kaita, who was his political associate, was a man of remarkable virtues who inspired whoever interacted with him.

According to Mr. Abubakar, few Nigerian politicians have the courage to disagree with the people in power in order to sustain political patronage for survival.

He explained that the late Mr. Kaita was never afraid to speak his mind in pursuit of his principles, including his insistence that political parties must respect internal democracy in order to be credible.

He noted that the late Mr. Kaita had left an unblemished public service record because politicians of his generation were motivated by the passion for service.

He recalled that his close association with Mr. Kaita was a beneficial experience because he was a man of vast knowledge of politics and intricacies.

President Muhammad Buhari had earlier expressed his condolence in a similar message.

In his reaction, the Kaduna State Governor, Nasir El-Rufai described Mr. Kaita as “a quintessential leader and patriot”.

Mr. El-Rufai in a condolence message issued by his spokesman, Samuel Aruwan, said the deceased had exhibited courage in leadership and patriotism in all his political engagements during his life time.

“Alhaji Lawal Kaita was a quintessential and courageous leader who served the old Kaduna State with dedication and commitment in the course of his leadership in 1983.

“Alhaji Kaita was a patriot and a role model for present and future leaders.’’

Also, the Arewa Consultative Forum (ACF) said it received the news of the death of Mr. Kaita, one of its foundation members, with shock; adding that the deceased was a bridge-builder.

“Nigeria has lost one of its illustrious elder statesmen, a bridge builder and democrat.

“Late Kaita will be remembered for his humility, commitment to national unity and peaceful coexistence among all Nigerians.

“May Allah grant his soul eternal peace in Aljanna Firdaus,’’ the ACF said in a statement by its National Publicity Secretary, Muhammad Ibrahim.