The National Leader of the All Progressives Congress, Asiwaju Bola Ahmed Tinubu, has returned to Nigeria amid reports of his death in the United Arab Emirates.

The news of Tinubu’s death spread on Tuesday following a report online that he died as a result of ill-health in the UAE.

However, amid confusion over the report, the Tinubu Media Office released images of the two term former Governor of Lagos State arriving the country via the Murtala Muhammed International Airport, Ikeja Lagos.

Dressed in a blue native attired, Tinubu was shown going through the arrival process and in a video. 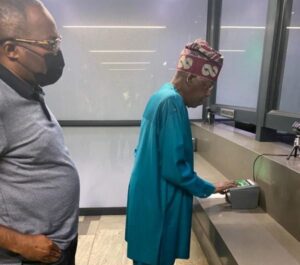