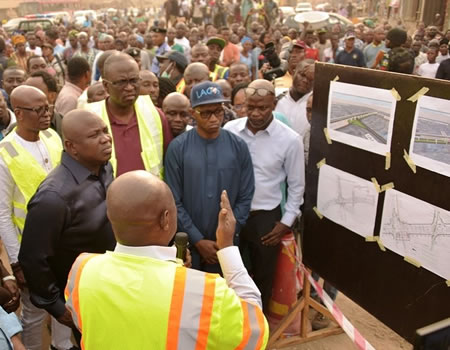 Gov. Akinwunmi Ambode of Lagos State on Tuesday assured residents that the Pen Cinema Flyover project would be delivered in the next 10 months.

Ambode gave the assurance while on an inspection of the site of the ongoing project.

He said that was a key intervention strategy by his administration to address the perennial traffic often associated with the area.

Addressing scores of residents, Ambode said that though the project might bring about some inconveniences, the end result would change the face of Agege forever.

“I want to reduce the sufferings that arise from the traffic congestion in this neighbourhood.

“So, I have decided to do the Pen Cinema Flyover starting from the beginning of this road by Total, and then run straight for one kilometre down and then an additional 400metres, totalling 1.4km, to decongest this neighbourhood up to the Abeokuta Expressway.

“You can see that I have inconvenienced you by the demolition that has taken place here. It is temporal.

“In the next 10 months by the grace of God, we will deliver this project by November 2018,” he said.

Ambode appealed to residents and community leaders to cooperate with the contractor ahead of the planned closure of some parts of the road from Jan. 4.

He also assured residents whose properties were demolished to give way for the project that they would be adequately compensated.

The governor said that the contractor would work day and night to deliver the project on schedule.

He said he would visit the site of the construction regularly to ensure the project was completed on time.

He said the planned restriction of movement would enable the contractor take full advantage of the weather and space to deliver seamlessly the critical aspect of the flyover construction.

This, according to him, falls within the Pen Cinema roundabout and railway crossing at Old Abeokuta Road junction.

Ambode also inspected the ongoing construction of the Oshodi Transport Interchange which is expected to be delivered by July 2018.

Other features include accessible walkways, pedestrian bridges/sky-walks to link the three terminals, shopping malls with street lighting and a dedicated security team on ground.