Vaseline, bags of sugar, vegetable oil cartons, and soaps, including baby wipes, are other products. The items are worth N12.8 million.

IDPs were informed by SOKAPU’s National President, Hon. Jonathan Asake, that these people cared deeply about their situation and had contributed to their welfare.

He said, “I am here with my team, to express our solidarity with you and to bring you goodwill from Governor Nyesom Wike of River State who came to Kaduna in April for campaigns and donated to the IDPs in the state,” he said.

“I have followed the cruelty that you have had to face in the hands of marauding armed herdsmen and your subsequent displacements, which has also attracted the sympathy of Gov. Wike.

“It is unacceptable that peaceful, harmless and unarmed people will be living their normal lives just to be attacked, killed, kidnapped and their communities taken over by armed herdsmen and no one is called to book.

“But the world is watching this criminality against you and other affected communities of Southern Kaduna and by the grace of God, justice shall come one day.

“The major reason why there is a government is for the protection of lives and property and where that is not in place, then the purpose of that government has failed,” he went on.

“I am therefore calling on the international community, all men and women of goodwill and conscience to intervene for these poor people and come to their.”

Markus Danja, the private secretary of Dr. Raphael Maiwada, the late paramount ruler of the Agom kingdom in Adara, accepted the gifts on behalf of the IDPs and expressed gratitude on behalf of the entire Adara country for Governor Wike’s generosity.

“Be strong and stand united. As evil and as bad as it is, one day, we shall conquer,” he said. 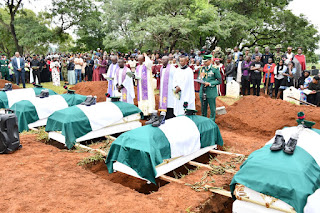