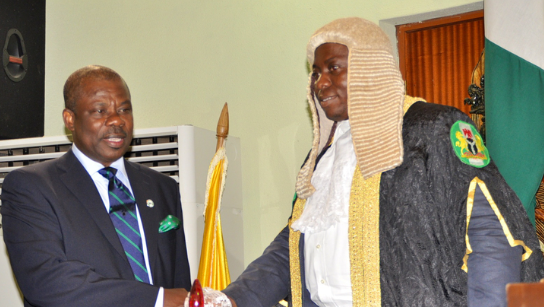 Verified information reaching NewsClick Nigeria has it that a two-term Speaker of the 7th & 8th Session of the Ogun State House of Assembly and member of the All Progressives Congress Presidential Campaign Council (APC PCC), Rt. Hon. Suraj Adekunbi missed death narrowly in a fatal New Year’s day auto accident on his way to Lagos from Abeokuta, the state capital.

NewsClick Nigeria gathered that the former Speaker was travelling to Lagos in his Prado Jeep with his convoy on the Abeokuta Siun-Kobape Expressway to link Sagamu Interchange to Lagos-Ibadan Expressway when according to Federal Road Safety Corps (FRSC) sources, a lorry travelling on the opposite lane, inbound Abeokuta lost control, climbed the median and ran into the Ex-Speaker’s convoy injuring him badly and killing one of his aides on the spot.

The fatal accident, according to a source who confided in NewsClick Nigeria occurred around 8.45am yesterday (Sunday January 1, 2023) at the notorious Onipepeye spot.

The injured former Number One Ogun State lawmaker was subsequently rushed to hospital in Abeokuta for treatment while the corpse of his aide was deposited at the mortuary.

This medium learnt that the renowned Politician was heading to his Lagos home for the New Year festivity with his family and political associates in the APC Presidential Campaign Council when the unfortunate accident occurred.

Speaking exclusively to NewsClick Nigeria from hospital bed where he’s currently undergoing treatment, Adekunbi while expressing appreciation for his miraculous escape from the crash, spoke of his sadness at the death one of his Aide.

“All I heard was a loud bang on one of the vehicles (Hilux) in my convoy. The vehicle (Prado Jeep) I was in ran into the Hilux with force from the lorry that hit it (Hilux). I’ve never experienced such in my life losing one of my dear people”

“We don’t know what happened to the lorry to have left its lane on the opposition direction and jump the median to then come run into my convoy,” the former Speaker explained.

Adekunbi was at a loss of what could be the fundamental issue with that trouble spot (Onipepeye) which according to him the government he served under “did a lot with other stakeholders to stem the frequency of road crashes” there.

NewsClick Nigeria gathered that several high profile deaths from road crashes have been recorded in recent past on that same spot.

On February 22, 2019 at the Onipepeye spot, Ex-Governor Ibikunle Amosun’s aide, Adeniyi Adesanya died from injuries sustained from a fatal accident while a former Secretary to State Government, Taiwo Adeoluwa reportedly got involved in a fatal accident sustaining severe injury and was rushed to the Federal Medical Centre, Idi -Aba Abeokuta.