Naira fell marginally against the U.S dollar at the parallel market on Wednesday, after the Central Bank of Nigeria (CBN) announced that it has ended the sales of forex to Bureau De Change operators.

Data recorded on abokiFX.com, a website that collates the parallel market rates in Lagos, showed that naira traded at N522.00 per $1 in the midday on Wednesday.

However, at the importer & exporter (I&E) window, it traded moderately to at N411.50 per dollar. 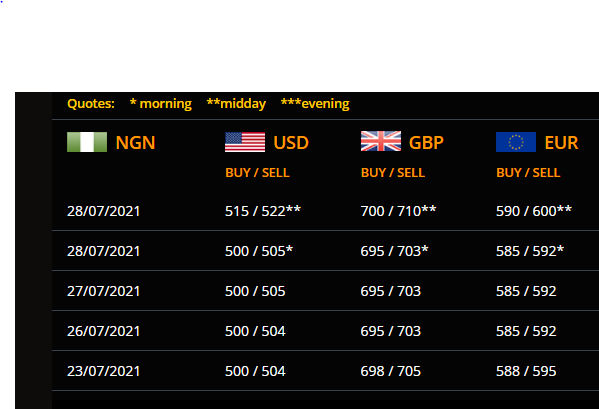 Recall the central bank lamented the parallel market had become a conduit for illicit forex flows and graft.

The CBN said it will also call off the processing of applications for for BDC licences in the country.

The CBN governor, Godwin Emefiele, who disclosed this during a live TV broadcasting while announcing that the bank has retained its benchmark policy rate, noted that weekly sales of foreign exchange by the CBN will henceforth go directly to commercial banks.

“We are concerned that BDCs have allowed themselves to be used for graft,” Mr Emefiele said.