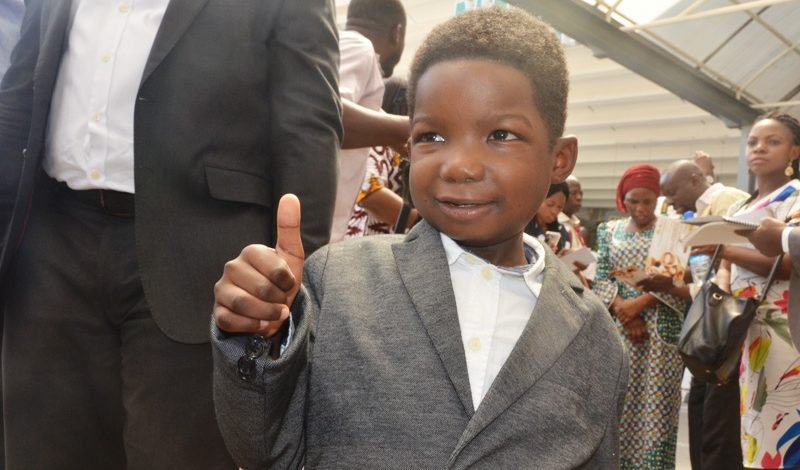 A six-year-old victim of Boko Haram violence, Ali Ahmadu, has returned to Nigeria after undergoing a surgery in Dubai, United Arab Emirates, UAE.

Ahmadu was flown to Dubai on September 10 this year under the umbrella of GIPLC, a non-governmental organisation that coordinated the appeal for help to enable the young boy walk again, after he was attacked and maimed by insurgents. Following the appeal, the Dickens Sanomi Foundation provided over N17 million for the hospital fees as well as transportation and other services in Dubai.

Ali returned to Abuja aboard Ethiopian airline accompanied by his aunt and Nuhu Kwajafa, the coordinator of GIPLC, who were by his bedside during the period of treatment and rehabilitation.

An official of the foundation, who received Ali at the Nnamdi Azikiwe Airport, Goodluck Hayi, in a brief address to journalists said the foundation will be working with Ali’s family through GIPLC to support his post-surgery life.

“I am authorised to announce that an educational scholarship will be provided for Ali until he gets to University by the Taleveras Foundation.”

Mr. Hayi recalled that about three months ago, “we all witnessed at the same airport Ali Ahmadu being taken away on a wheel chair, today to the Glory of God we are here to receive Ali Ahmadu, walking handsomely into our arms.”

He said what started as ”a painful journey for Ali after the Boko Haram attack in Chibok, four years ago that confined him to a wheel chair”, has transformed into a ”journey of hope, love and care.”

“Dickens Sanomi Foundation is backed by the principle of love and care, one that was practised and preached by the late assistant inspector general of police, Mr Dickens Sanomi. Today, we demonstrate these principles by being our neighbours keepers and teaching love by showing it,” he said.

The coordinator of GIPLC, who also spoke upon arrival from Dubai said young Ali “suffered excruciating pains all over his body, brought upon him by the senseless marauders,” when they invaded his village of Chibok in 2014.

Mr. Kwajafah said Boko Haram terrorists “crushed everything/everyone in their path, severely damaging his still-forming vertebral column in the process but the hand of God preserved Ali, so we may give glory to His name.”

He added that since that incident, the little boy never accessed any form of orthodox medication.

“He was at the mercy of traditionalists, in highly unpredictable and perilous times. Obviously, during this period, access to education, nutrition, psychosocial tuning, water, sanitation or hygiene, was very limited, if not non-existent.

“He was immobile and fast detoriating, physically and mentally, from that period until the 1st quarter of this year, 2017, when GIPLC made contact with him,” he said.

“After duly assessing the various options open to us, from all over the world, we resolved to take him to the UAE. After almost 6 hours of extremely delicate surgery, about a week in ICU and a month in recovery, Ali took his first steps into a brighter future,” he said.

Mr. Kwajafah said GIPLC is committed to Ali’s post surgery well-being and have received confirmation from Dickens Sanomi Foundation to support his settling in the society, while the Taleveras Foundation will provide him with a scholarship.

Mr. Kwajafah said GIPLC will also organise an end of year party for orphans and vulnerable children, targeting over 3,000 of them.