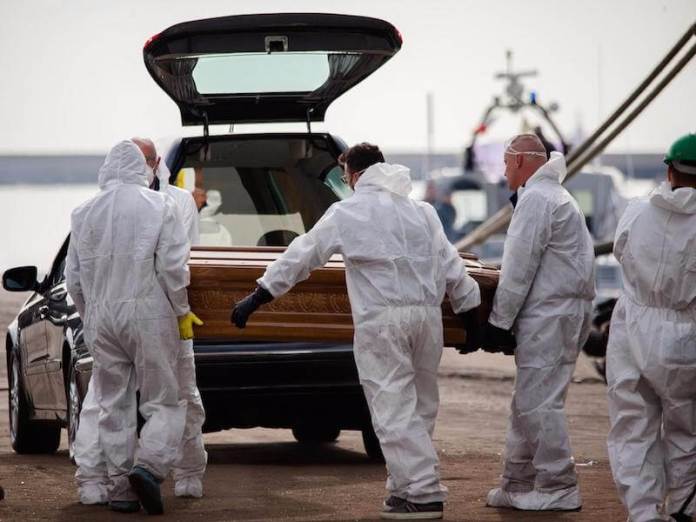 The remains of 26 Nigerian women believed to be migrants have been recovered from a Spanish warship in the Italian coast city of Salerno.

A report by the British Broadcasting Corporation on Monday said a Spanish warship, Cantabria, which docked in the city, was found to be carrying 375 rescued migrants and the dead women.

According to the report, 23 of the dead women were on a rubber boat with 64 other people.

It also quoted Italian media report that the women’s bodies were kept in a refrigerated section of the warship. Most of them were between the ages of 14 and 18.

UNHCR spokesman, Marco Rotunno, said the 26 dead were involved in a shipwreck off Libya.

Most of the 375 survivors brought to Salerno were sub-Saharan Africans from Nigeria, Senegal, Ghana, The Gambia and Sudan, the daily La Repubblica reports.

Among them were 90 women – eight of them pregnant – and 52 children. There were also some Libyan men and women on board.

The BBC said, “People-smuggling gangs charge each migrant about $6,000 (£4,578) to get to Italy, $4,000 of which is for the trans-Saharan journey to Libya, according to the Italian aid group L’Abbraccio. Many migrants have reported violence, including torture and sexual abuse by the gangs.

“Italian prosecutors are investigating the deaths of 26 Nigerian women – most of them teenagers – whose bodies were recovered at sea.

“There are suspicions that they may have been sexually abused and murdered as they attempted to cross the Mediterranean. Five migrants are being questioned in the southern port of Salerno.”

Reacting to the development, some notable bodies and individual Nigerians blamed the Federal Government, its agencies and the harsh economic situation in the country for the tragedy.

The Centre for Anti-Corruption and Open Leadership, said the Federal and state governments must tackle the rising rate of unemployment in the country to curb the menace of human trafficking.

The CACOL Director, Debo Adeniran, said, “The problems of illegal migration and trafficking are an accumulated issue. We have a high population of children and youths in this country and we are not planning for their future. Workplaces are actually winding up and no new jobs are springing up. This is why people want to leave and look for the proverbial ‘greener pastures.’

“The establishment of agencies such as NAPTIP (is commendable) but in recent times, some officials are complicit in some of these cases. Authorities need to pay more attention to these agencies, including the Nigeria Immigration Service. If our agencies do their work conscientiously, we will not have a lot of these problems.