On Thursday, Nigerian music stars David Adeleke, better known as Davido, and Tiwa Savage were among the top performers at the 2022 Confederation of African Football Awards.

In Rabat, Morocco, the singers joined eminent sports figures from around the world.

The sonorous singer performed two of her hit songs, “Koroba” and All over”.

Also, former Super Eagles captain, Austin ‘Jay-Jay’ Okocha was present at the glamorous event. Jay-Jay Okocha presented the award for ‘Goal of the Year’ to Papa Ousma Sacho of Senegal at the ceremony.

At the event, Togolese professional footballer, Emmanuel Adebayor teamed up with Nigerian superstar, David Adedeji Adeleke also known as Davido to present an award for the ‘Young Female Footballer of the Year’ to Ghana’s Evelyn Badu.

The red carpet ceremony at the amazing Mohammed VI Technical Centre brought together all the nominees of the 13 different categories.

The Nigerian Football Federation (NFF); CAF legends; football leadership, as well as personalities from across the African continent were present at the ceremony.

During the event, Super Falcons and Barcelona female striker, Asisat Oshoala was crowned the winner of CAF Women’s Player Of The Year for the fifth time.

Also, Sadio Mane won the 2022 CAF Player Of The Year Award in the male category. 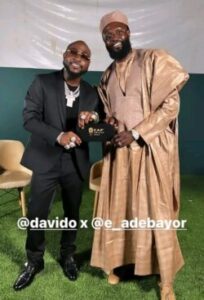 From Zambia to Kenya, youths are taking over leadership across Africa – Paul PSquare

VIDEO: Tiwa Savage shows off body at concert in UK