Stars of “Game of Thrones” will appear on a new collection of stamps to celebrate Britain’s contribution to the fantasy series, Royal Mail announced.

Ten characters are pictured in the souvenir series unveiled on Wednesday, set against dramatic scenes from the hit US show.

Highlighting the prominence of British stars among the cast, the stamps feature actors Kit Harington, who plays Jon Snow, and Emilia Clarke (Daenerys Targaryen) among others.

Nikolaj Coster-Waldau, from Denmark, and American Peter Dinklage are the two actors included who hail from elsewhere.

One of the stamps features an image of the series’ famous Iron Throne.

An additional five stamps feature non-human characters, including dragons and dire wolves, as part of the series which will be available from January 23. 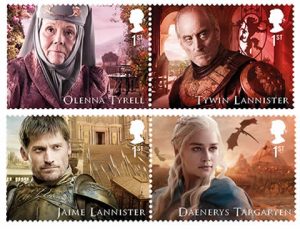 Filmed largely in Northern Ireland, the fantasy epic has become a global phenomenon since its debut in 2010.

The latest seventh series has also featured British pop sensation Ed Sheeran, who did not make it into the Royal Mail collection.

The television series has won 38 Emmys, more than any other fictional show in history, and one Golden Globe award.

“Game of Thrones” is also a nominee for best drama series at this year’s Golden Globes, competing against shows including “The Handmaid’s Tale” and “The Crown”.