It is the standard practice for corporate entities, particularly commercial banks in Nigeria to send seasonal greetings to their customers who are faithfuls of the two major religions (Christianity and Islam) in the country.

Newsclickng.com observes that the banks also send messages either via text, email or WhatsApp and other social media channels to celebrate their customers’ birthdays. These are some of the strategies adopted by corporate communications team of these banks to either retain their loyal customers or scout for prospective ones due to the highly competitive nature of their operating environment.

However, what was supposed to be a congratulatory message to millions of its Christian customers nationwide to commemorate end of the Lenten (fasting) period and memorial of the death and resurrection of Jesus Christ became a condemnable viral content that has left many offended and calling for the sack of the bank’s communications team.

How it all started

It all began on Sunday (April 18), a day believed by the Christian faithfuls to commemorate the resurrection of Jesus Christ from the dead having been crucified on the Cross on Friday (Good Friday).

The bank in a message via email and their verified social media pages (now deleted) showed a puffed, golden brown, halved Agege Bread with the caption, ‘Like Agege Bread, He Rose… Happy Easter’.

Newsclickng.com reports that Agege is a suburb of Lagos State known primarily for baking fresh, soft, stretchy and chewy texture bread. It was the go to place for bread in the 1990s and early 2000s. 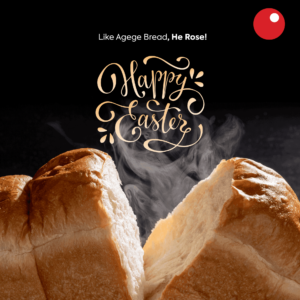 However, Nigerians, particularly the Christian faithfuls will have none of that. In a swift response to the bank’s message, customers and non-customers alike bombarded the bank on social media describing their (the bank’s) message as derogatory and insensitive.

See some of the reactions below:

What a blasphemy by Sterling bank against our Lord Saviour Jesus Christ. Can he utter such against muslim religion and still be alive. The MD should resign or Christians should all shun the bank and withdraw all their money from Sterling Bank let him go and eat his Agege bread. pic.twitter.com/1lveBnqukb

Sterling Bank wants to release a message to celebrate our Lord and Savior Jesus Christ guess what they say? “Like Agege Bread, He's Risen"😭😭
Christianity is the most disrespected religion in the universe.. They can’t try that with the other religions..

Who are crack heads running Sterling bank?
Did anybody beg you to put out a message celebrating Easter?
Why would you diminish the essence of Easter by liken the resurrection of Jesus Christ to Agege bread?
This is beyond terrible

‘Like Agege bread, He rose’ – every single person involved in the thought process and actual act of sending such a message yesterday from Sterling bank to all their customers deserve to be queried. Every single one of them.

However, others who were of different opinions said the message was a case of advert copy not properly executed and might not necessarily mean harm to the Christian community.

See reactions in that line too:

I feel it is a case of poor execution of creativity & not mischief.

Jesus called himself the bread of life. They tried to be metaphorical. Bread when baked will rise, & Jesus rose.

Imagine a copy: Like the Bread of Life, He Rose! pic.twitter.com/3y7eHVyUMD

Jesus: “I am the bread of life”
Sterling Bank: “Just like Agege bread, he rose.”
Nigerian Christians: “This is distasteful and repugnant!”

Owing to the heated criticisms that greeted the message, the bank deleted and subsequently uploaded another copy of an opened tomb significant of Christ’s departure from the grave and added the caption, ‘…let the one who has never sinned throw the first stone.’ 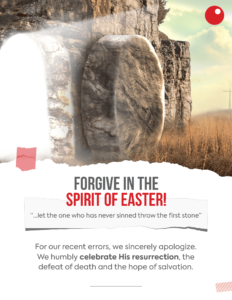 However, when that (the first apology message) appeared to have rather expanded the crisis than solve it, the Chief Executive of the bank, Abubakar Suleiman personally released another apology letter appealing to the Christian faithfuls. 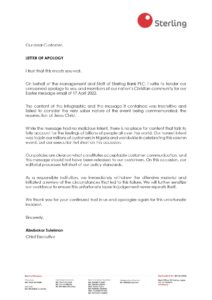 Nwakanma states this in statement on Monday in reaction to message from the bank. Read full statement below.

Unless they are equally complicit, the Management of Sterling Bank should clear its Corporate Comms team on Tuesday.

Everyone involved in preparing and placing that obnoxious ad that pokes noxious fingers into the eyes of all Christians in Nigeria should not be involved in communications one day extra.

Have you seen the obnoxious and insulting ad? A corporate entity such as Sterling Bank signs off on an ad that compares the basis of the Christian faith to Agege Bread. It is the height of idiocy! It is an offensive joke.

The resurrection of Christ is the foundation of our faith as Christians. Blaze comparisons in the name of creativity are offensive.

Then Sterling Bank worsens the offence by offering a non-apology. The uninformed copy asks us to “Forgive in the Spirit of Easter” but confirms they are not sorry. It states, “Let the one who has never sinned throw the first stone”. Foolishness!
“For our recent errors, we sincerely apologize. We humbly celebrate his resurrection, the defeat of death and the hope of salvation”.
(Please prefer “apologise” with an S for UK English in Nigeria!)

Which dullards did this? Is it because Christians have few bomb-throwers and arsonists?

Note that it would be compounding the offence to reproduce the offensive ad.

It was a joke taken to far – Cleric

A pastor with one of the Pentecostal churches, Samuel Aduragbemi told Newsclickng.com in a short interview that the Easter message from the bank was a ‘joke taken too far’. He said it is more distasteful that such message was coming from a known corporate entity entrusted with the monies of millions of people.

’I find it rather unbelievable that the management of Sterling Bank could be so careless as to allow such insensitive message pass out of its channels to the public. What exactly is the correlation between the death, resurrection of Jesus Christ and Agege bread?’. Is this a deliberate attempt to rubbish the Christian faith or what?’.

‘I hope the bank’s management learns from this grievous mistake and be sensitive enough when dishing out a public message next time. What they just did can snowball into a big religious crisis if not well managed. I wish them the very best’, the cleric told Newsclickng.com.

Meanwhile, the Advertising Practitioners Council of Nigeria (APCON) has reacted to the bank’s controversial Easter message.

The regulatory body on Monday described the message as offensive and provocative.

APCON also said the advert copy was not submitted for approval before it was made public.

In a statement on Monday signed by its Registrar and Chief Executive, Olalekan Fadolapo, APCON said the advert was distasteful, noting that Sterling Bank Plc would be punished for the action.

It read, “The Advertising Practitioners Council of Nigeria has observed with displeasure the insensitive and provocative Easter celebration advertisement by Sterling Bank Plc which compared the resurrection of Christ with Agege Bread.

“The distasteful advertisement was neither submitted nor approved for exposure by the Advertising Standards Panel, the statutory Panel charged with the responsibility of ensuring that advertisements conform with the prevailing laws of the federation as well as the code of ethics of Advertising in Nigeria.

“APCON will take necessary actions to ensure that Sterling Bank is sanctioned for the exposure of such offensive advertisement according to law and that no religious belief or faith is ridiculed or any blasphemous advertisement exposed in any guise.”