With about 25,000 accredited delegates expected to join nearly 120 world leaders in Glasgow, United Kingdom for UN climate change summit, COP26, the city is undoubtedly the Cynosure of all eyes.

World leaders, negotiators, British royals, celebrities, journalists, activists, and demonstrators will all be converging on Glasgow, the most populous city in Scotland, for the 26th Conference of the Parties.

As planned, this year’s climate summit is a critical one, for measuring how much progress has been made in cutting greenhouse gas emissions and for getting countries to sign up for aggressive new commitments. Scientists warn that rapid, large-scale cuts are the only way to avoid ever-worsening climate disasters.

This beautiful city that will host about 30,000 visitors is the fourth-most populous in the United Kingdom, as well as being the 27th largest city by population in Europe. In 2020, it had an estimated population of 635,640. Historically part of Lanarkshire, the city now forms the Glasgow City council area, one of the 32 council areas of Scotland, and is governed by Glasgow City Council. Glasgow is situated on the River Clyde in the country’s West Central Lowlands. It is the fifth-most visited city in the United KingdomGlasgow grew from a small rural settlement on the River Clyde to become the largest seaport in Scotland, and tenth-largest by tonnage in Britain.

How prepared is the city?

In what has been described as the “the biggest and most complex event ever staged in Scotland”, around 10,000 officers from forces across the UK have been drafted in to support Glasgow’s cops. Nearly 200 police dogs will also do their part in ensuring ‘ruff justice’ is dealt 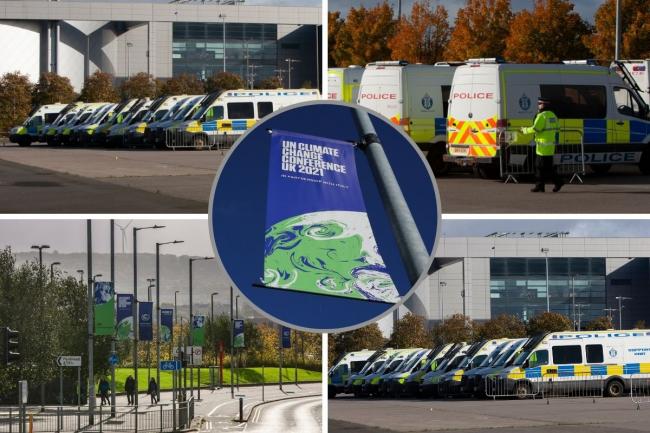 Things are expected to come to a head-on Saturday, November 6, when as many as 200,000 activists march through the streets in protest over the ongoing climate emergency.

Bernard Higgins, the assistant chief constable co-ordinating the COP26 police response, previously said “the significance and scale of this event should not be underestimated”.

He said: “COP26 will be the biggest and most complex event ever staged in Scotland.

“This will necessitate the largest mass mobilisation of police officers that has taken place in the UK in many years.”

Where exactly will the event take place in Glasgow?

Glasgow was supposed to host the summit in 2020 but it was postponed due to the Covid pandemic.

COP26 will now take place at Glasgow’s Scottish Events Campus, about a mile west of the city centre, from 31 October to 12 November.

The summit site will be split into a blue zone and green zone.

The Blue Zone has become official UN territory for the duration of the conference and will be patrolled by armed UN officers under the highest levels of security.

It hosts the negotiations and is only open to those officially involved in the summit.

The Blue Zone includes The Scottish Exhibition Centre – with its five huge halls – the 3,000 seat Armadillo and the Hydro arena.

On the south of the river, the Scottish Science Centre will be the heart of the green zone, which is open to the public for various ticketed events.

Leaders and heads of State from countries around the world and thousands of delegates are expected in Scotland for the summit, which is being hosted by the UK government.

UK Prime Minister Boris Johnson will be in Glasgow for the summit but the Queen has been told not travel on medical advice.

Prince Charles and his son Prince William will now represent the United Kingdom at official functions.

US President Joe Biden has confirmed he will attend as will many other world leaders, although security around who will be travelling is tight

Russia’s President Vladimir Putin will not be there but insisted climate change was an “important” priority.

And Chinese President Xi Jinping is also unlikely to be there, though Chinese officials have reportedly not entirely ruled out a change of plans.

Apart from leaders, famous names such as Sir David Attenborough are expected to attend. He has been named as COP26 People’s Advocate and he will address world leaders and other attendees during the summit.

Former US President Barack Obama is expected to meet young climate change activists and highlight their work around the world.

Swedish activist Greta Thunberg, whose school strikes sparked the Fridays For Future movement, has also confirmed she will come to the city during the UN summit to take part in a climate strike on Friday 5 November.

Where will everyone stay?

For security reasons, it is not known where world leaders will be but there are reports of many staying outside the city as far away as St Andrews, Edinburgh and Perthshire.

Accommodating 25,000 delegates and tens of thousands who want to attend the COP for other reasons has been a major headache for the city.

All hotels are full and charging a large premium on their usual prices.

BBC Scotland found one room in the city which is usually £42 per night being advertised as costing £1,400 per night during the summit.

One Airbnb host was banned from taking bookings during COP26 after he hiked the cost of his two-bedroom flat by $2,000 to a client who had already paid well in advance.

The host said he was concerned he had “missed out on a great deal of money” after seeing the average room price increase by “400%” in the area.

The shortage of accommodation led to two Estonian cruise ships being berthed at King George V dock, next to Braehead Shopping Centre in Renfrew.

They will provide accommodation for security and production staff working at the summit.