THE Osun State commissioner for innovation, science and technology Engr Remi omowaiye has explained reasons why the entire Ilesa city went agog last week for the Governor of the state of osun, Ogbeni rauf aregbesola when he came for the official commissioning of the magnificently built Ilesa Government High school.

He said the people of Ijesaland will always be grateful  to Rauf  Aregbesola  for serving as a worthy ambassador who through his bold and brilliant steps has significantly developed  the state against all odds particularly  for the various intervention of the present administration in remodelling the ancient city which led to the birth of the a ultramodern high school adjudged to be the best public school in the country in contemporary times in spite of the paucity of funds accrued to the state.

“The massive and unprecedented reception is a genuine show of love and loyalty to the policies of the APC led government in the state which has bridged the wide gap of infrastructure deficit in the practical approach of re-engineering the wheel of progress and development.

“I make bold to say that the 3000 capacity steel technology Ilesa Government High School is today the best public school in Nigeria in terms of content, facilities, technology and structure, It was prudently built with N1.3Billion but it real value as at today is N3.5Billion. I beg you to point to any public school you have seen of this magnitude and architectural masterpiece, It’s a great legacy because 11 of 3000 capacity high schools have been constructed in the 7years of the Aregbesola administration, wherein President Muhammadu Buhari also advised other governors in Nigeria to emulate the virtues and commitment of Osun when he came for the commissioning of Osogbo High school sometimes ago,” Omowaiye stated

The Ijesa politician also doused the overblown tension arising from the change of name of the school raised by the Alumni Association of the school, times and again, we have seen countries, nations and schools change names. A case insight is the University of Ife which later changed to Obafemi Awolowo University; it will amaze you to know that the Ilesa grammar school was at a time been referred to as Ijesa High school, and the post primary public institution ( acquisition of land and other property) edict of March 1975 has given absolute ownership of all public school to the  state government , and the  renaming of the some school is in tandem with the re-classification of schools which was a painstaking thought and recommendation of the education summit of 2012.

He said “the orchestrated media attack by the mischievous element on Osun debt profile is needless. If you go to America today, an average citizen of the USA lives his life on debt anchored on credit facilities he enjoys on health, mortgage in properties and cars; till date the USA is the most indebted country in the world and again the most viable economically. 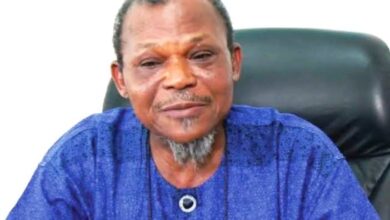