Adamawa Government on Tuesday confirmed a cholera outbreak in three local government areas of the state with one death from the 76 cases recorded.

This is contained in a statement signed by the Information Officer of the State Ministry of Health, Abubakar Mohammed in Yola.

“Adamawa State Ministry of Health wishes to inform you and the general public that the state has recorded confirmed cases of cholera in three local governments namely Yola North, Yola South and Girei respectively.

“The Epidemiological unit of the ministry received the report on acute watery diarrhea and vomiting on 12th May, 2019, samples collected and tested using both Rapid Diagnostic Test (RDT) and cultured results from reference laboratory yielded positive.

The ministry said that it has commenced action with other partners, adding that the State Rapid Response Team and Emergency Operation Centre had been activated, while Active case search teams were recruited, trained and deployed.

It said that community mobilizers were also engaged to carry cholera preventive messages on house to house bases, while All identified households in the affected communities were decontaminated.

It said treatment center had been set up in Yola Specialist Hospital to support case management.

“A 24 hour ambulance services and toll free lines were made operational to ease the movement of suspected cases from the communities to the health facilities. Mass media campaigns in radio and TV will commence to sensitize general public on cholera prevention and control measures and good hygiene promotion practices.

“General public is hereby encouraged to report any suspected case immediately to the nearest health facility or Call the following toll free lines 08031230359, 07080601139 for prompt response. All calls made to the lines are free of charge,” the statement said.

God is responsible for my sexy shape not surgically enhanced – Omobutty 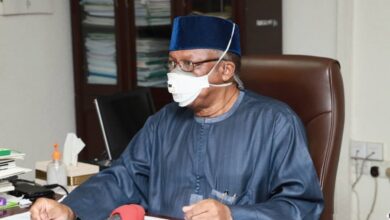