If the words of the Economic and Financial Crimes Commission (EFCC) Chairman, Abdulrasheed Bawa, are anything to go by, former Pertoleum Resources Minister Mrs. Diezani Alison-Madueke would soon be repatriated.

He said several cases surround the one-time minister, who has been living in the United Kingdom (UK) since 2014.

According to the anti-graft agency boss, $153 million and 80 properties have so far being seized from her.

Besides, Bawa said the trial of all those involved in the $115 million poll bribery scandal has not been discontinued, adding that the EFCC was awaiting the return of Mrs. Alison-Madueke to the country.

On Illicit Financial Flows (IFFs), Bawa said: “It’s a huge challenge to get the proceeds of crime repatriated to Nigeria.”

He said there is no going back on the June 1 date set for bankers to declare their assets because financial institutions remain critical in the battle to curtail financial crimes.

Bawa, who said he is not in any way intimidated, but challenged by the task ahead, spoke during a One-on-One interview on the the Nigerian Television Authority (NTA).

The text of Bawa’s interview was contained in the EFCC’s in-house magazine: “ALERT”, which was made public yesterday.

Speaking on Mrs. Alison-Madueke, Bawa said: “There are several cases surrounding that. As you may have read, I was part of that investigation, and we have done quite a lot. In one of the cases, we recovered $153 million; we have secured the final forfeiture of over 80 properties in Nigeria valued at about $80 million.

“We have done quite a bit on that. The other cases as it relates to the $115 million INEC bribery as the media has sensationalised it, is also ongoing across the federation

“We are looking forward to the time when we will, maybe, have her in the country, and of course, review things and see what will happen going forward. The case has certainly not been abandoned.”

Bawa added: “The position is very clear. The EFCC succeeded in 12 years to get him convicted at the Federal High Court. Of course, he went to the Supreme Court, and because the judge that convicted him has been elevated, the ruling was made and the EFCC as a respecter of the rule of law, we have taken it as it is. The Supreme Court has ordered that we should go back to the Federal High Court in Lagos.

“Now, we are at the Federal High Court in Abuja, and we have applied to the court for the case to be transferred to Lagos as ordered by the Supreme Court to enable us start all over again.

“It however, draws a precedence, and those are the issues; law as the lawyers will say, is a living thing; we had the ACJA in 2015, we have had this problem of elevation of judges from High Court to Court of Appeal, and we pushed that they should be given the opportunity to finish their cases, because some of these cases have taken a very long time.

“We thought we had succeeded in getting this in ACJA, The law was however, not seen as such. Now, we may have to solve the problem from the constitution, and then, we will be home and dry.”

On Malabu Oil Bloc (OPL 245), the EFCC chairman said three cases are ongoing and therefore will not want to make any comment on issues before the court.

He said: “It will be sub judice to be discussing matters that are in court. But, the briefings that I have, is that we have three cases – one at the FCT High Court, and two at the Federal High Court that we are prosecuting around the issues of Malabu and other associated individuals and interested parties. So prosecution is going on.”

Acknowledging that the challenges of repatriating looted funds from abroad is not easy for Nigeria and other countries, he said: “It’s a huge challenge, actually, to get the proceeds of crime repatriated to Nigeria, and indeed, all other victim countries. But, I think the world is growing in that regard. There is the UNCAC – the United Nations Convention Against Corruption and Nigeria is a signatory to this and other agreements.

“The French government is working towards seeing that African countries have access to these funds being laundered over there. We have been working closely with our strategic partners – the FBI, the UK NCA, the German Police, the Australian Police and others. God willing, we will get there.”

On the June 1 commencement date for the decalaration of assets by bankers, Bawa said: “It has generated a lot of interest. What we said is that, ‘look, there is a law called Bank Employees Declaration of Assets Act 1986’.

“I was six-years-old when that law came into being. It’s not something new. And the EFCC did not say ‘come and declare your assets as bankers’. What we said is that come June 1, we are going to be demanding for it, because we are empowered by law, to demand information from the private sector, in the discharge of our mandate.

“The EFCC is empowered by law to enforce all economic and financial crime laws in Nigeria. And that is the position. The financial institutions in this country are very critical in trying to curtail the problem of financial crimes.

“At the tail-end of every financial crime, if the criminal wants to get the proceeds, they conspire with them. So, we said we need to know what you have. There hasn’t been full compliance with that law.

“I don’t know if my memory serves me right, but in 2016, the CBN also called for the bankers to comply. Yes, some have complied, some have not. The law is there. All we are saying is that come June 1, we are going to be demanding for it. We want to look at it vis-a-vis other information that we have. It is something that as an institution, we have resolved to do. Of course, we expect stiff resistance, but we are determined.”

On his appointment as the youngest EFCC chairman, Bawa said he is not intimidated in any form.

He added: “I am not intimidated at all. Rather, I am challenged. The EFCC itself is being challenged. Nigerians, because successive leaders have come from the Police, they felt that the EFCC is supposed to be headed by the police.

“I’m humbled that EFCC has grown and I happen to be the first non-Police Chairman of the EFCC. It’s a huge challenge; we have been there from the beginning. I was part of the Course One of the EFCC-trained operatives.

“Of course, my colleagues and I rose through the ranks – from ordinary team leaders, to sectional heads, heading various zones, and the government felt that time has come for somebody from within the system [to head the Commission] and I happen to be that person. So we are not intimidated. We know what the EFCC is set out to do.”

Asked why the EFCC was always after small fries like Yahoo boys instead of politicians and public officers who have looted the treasury, Bawa said EFCC has a mandate to prosecute those who have crossed the line.

He said: “It is part of our responsibility to see that the ‘small fries’ are prosecuted as well as the ‘big fries’. Advance Fee Fraud, like cybercrime, is where the small fries normally play around.

“They cross the line there, and we charge them. And more often than not, we secure their conviction. We also charge the big ones to court as well. But issues of delay or whether or not we secure conviction at the end of the day, is for the court to determine.

“We have tried, and we are improving, to ensure that more and more of them are also charged and convicted. We are working tirelessly on that.” 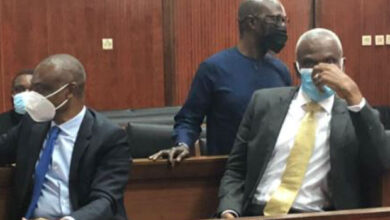