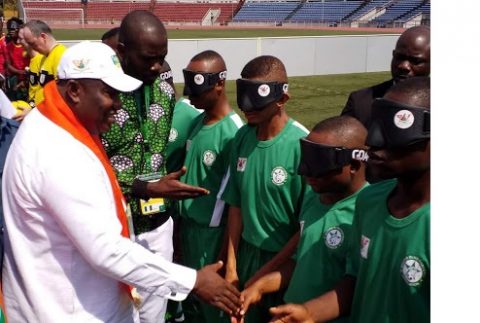 Morocco has again emerged the champion of the just concluded 2019 African Blind Football Championship held in Enugu after defeating Mali 5-1 on Sunday.

Morocco had defeated Mali 8-1 in Cape Verde in 2017 to win the tournament.

With the result, Morocco has qualified to represent Africa at the 2020 Tokyo Olympics in Japan.

In the other results of the day, Ivory Coast humbled Nigeria 2-0 to clinch the third position.

After the championship, the sponsor of the tournament and founder, BINA Foundation, Lady Ifeoma Atuegwu thanked all the teams for honouring the invitation.

She also praised the Moroccan team for emerging the champions and urged them to prepare well for the Olympic.

”You are now the champions of Africa and we look forward to see you rule the world,” she said.

Atuegwu thanked all that made the championship a success and promised good outing for Nigeria national team in next championship.

She noted that Cameroun had agreed to engage the Nigeria team in a friendly match and hoped that others would do the same.

”Nigeria is a good place to be and I know that you people will like to visit again, thanks for making our day,” Atuegwu said.

They are Morocco, Mali, Ivory Coast, Egypt, Libya, Niger Republic and Cameroun and the host, Nigeria.